Home > Inside FRASER Blog > Uncurrent Events: The Women of the FOMC

Uncurrent Events: The Women of the FOMC

Women have served at the Federal Reserve since its earliest days, not only as stereotypical typists and secretaries but also as researchers, examiners, and economists (such as Aryness Joy, contributor to the cost of living index). Janet Yellen made history in 2014 when she became the first woman to serve as Chair of the Federal Reserve. But few people know the names of the trailblazers who came before her to serve as Fed leaders. 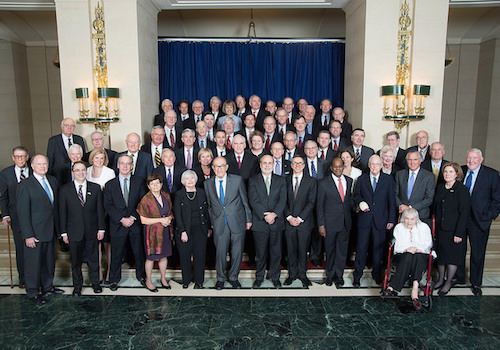 Current and former Board members and Reserve Bank Presidents at a commemoration of the Federal Reserve Centennial in 2014. Photograph from the Board of Governors’ flickr account.

In 1978, economist Nancy Teeters became the first woman on the Board of Governors of the Federal Reserve System. She began her work for the Fed as an economist in 1957 and before her appointment to the Board, she also worked for the Congressional Research Service, the Brookings Institution, and the Office of Management and Budget.[1] FRASER holds the memo recommending Teeters to President Carter and a collection of her public speeches and congressional testimony.

Famously, Teeters once likened the nation’s financial system to a piece of overstretched fabric threatening to rip. In an interview, she said she chose the metaphor specifically to emphasize her practical—and feminine—knowledge of the world.[2]

Countless women have served the Federal Reserve System as vice presidents, officers, members of Bank boards of directors, bank examiners, economists, and in nearly every other function, but only 14 women—including Chair Yellen—have been members of the FOMC. FRASER lets you browse materials from every FOMC meeting since the first one in 1933 and allows you to judge their influence for yourself.

Timeline of women in Fed leadership:

Sandra Pianalto: President of the Federal Reserve Bank of Cleveland (February 2003–May 2014)

[4] Board of Governors of the Federal Reserve System. “About the FOMC.” https://www.federalreserve.gov/monetarypolicy/fomc.htm