“As soon as practicable, the Secretary of the Treasury, the Secretary of Agriculture and the Comptroller of the Currency, acting as ‘The Reserve Bank Organization Committee,’ shall designate not less than eight nor more than twelve cities to be known as Federal reserve cities, and shall divide the continental United States, excluding Alaska, into districts, each district to contain only one of such Federal reserve cities.”

The law charged this new committee to gather testimony, “counsel and expert aid,” papers, and “to make such investigation as may be deemed necessary” to choose the location of the Banks. The committee (often referred to as the RBOC) invited commentary from business and banking interests throughout the United States. Banks and bankers, businessmen, local and state legislators, chambers of commerce, and individual citizens responded. 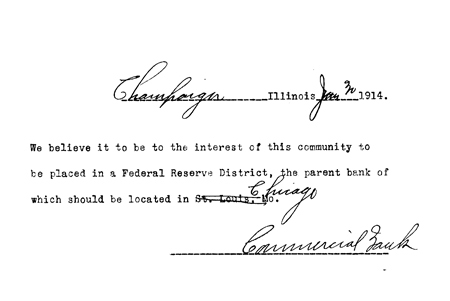 Thirty-seven cities[1]—from Boston to El Paso to Portland, Oregon—submitted documents as evidence for why their city would be an appropriate choice to host a Reserve Bank. Richmond, Virginia, wrangled with Baltimore for control of mid-Atlantic banking territory. St. Louis and Chicago sent ballots to banks throughout Illinois to garner their support; some banks crossed out the name of the sender and wrote in their own first choice. Each of the 37 cities made its case with testimony and documents on its financial, geographic, and business superiority.

The RBOC collection on FRASER is a fascinating snapshot of the commercial history of the United States in 1914. In the twenty-first century it may seem odd that the thriving metropolises of Los Angeles, Houston, and Miami have only branch offices rather than a Federal Reserve Bank, while smaller cities such as St. Louis, Cleveland, and Kansas City are home to Banks. However, the documents and maps in the RBOC collection show the importance of the cities chosen for Federal Reserve Banks at the time they were chosen.