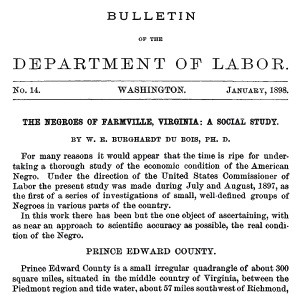 These reports, authored by notable scholars of the day, examine African American labor conditions in various regions and industries. W.E.B. Du Bois, a noted sociologist, historian, and civil rights activist, contributed three essays to the series. His essay on African American laborers of Farmville, Virginia, was one of the first of its kind and set the tone for the following essays in the series. Du Bois followed that essay with an examination of African American landownership in Georgia that provided an important look at the accumulation of land a generation after slavery.

Richard R. Wright, Jr., the first African American to earn a Ph.D. from the University of Pennsylvania and a professor at Wilberforce University in Ohio, examined the community of Xenia, Ohio.

Although this series had a limited run, the BLS continues to report on African American labor, economic conditions, and the status of African Americans in the workforce.