FRASER is in the process of adding a large collection of issues (currently 1870-1935) from the Commercial & Financial Chronicle. This weekly newspaper was modeled on The Economist and offered a summary of the business and banking news. The paper described itself as “A weekly newspaper representing the industrial interests of the United States.” It regularly published supplements on banking, railway and industry, states and cities, and street railways. William B. Dana was the founding editor, who in 1861 became the publisher of a precursor to the Commercial and Financial Chronicle: Hunt’s Merchant’s Magazine and Commercial Review. In 1865, Dana continued the work of the magazine by producing the Commercial and Financial Chronicle, intended to provide “All that the economist, the banker, the manufacturer, the agriculturalist, the shipper, the insurer, the speculator, may need to know in the course of his daily pursuits.[1]”

The Commercial and Financial Chronicle provides historians with contemporaneous accounts of the activities, interests, and issues facing businesses, as well as price quotes for stocks, commodities, and other financial instruments. Weekly issues also include an overview of the current financial situation, in addition to reports on large companies, commodities, and other commercial transactions. For example, the November 2, 1907, issue offers an account of the Panic of 1907. The Chronicle detailed “The Financial Situation” up to that point, describing the state of the money market and corporations, as well as the response by bankers and the government. This overall summary of economic and financial conditions in the nation on a weekly basis is a treasure trove of information for historians. 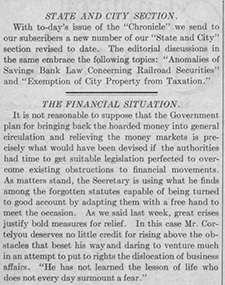 Excerpt from the November 2 issue, recounting the Panic of 1907.