FRASER and house plans don’t seem like a natural fit, but the Bureau of Labor Statistics Bulletin by Leifur Magnusson, Housing by Employers in the United States: Bulletin of the United States Bureau of Labor Statistics, No. 263, makes the connection quite nicely. This 1920 document examines employee housing provided by corporations in the early twentieth century. It also explores employer motivations for providing housing for workers, types of industries that furnish company housing, and costs involved in building and occupying such housing. In addition to this analysis, Magnusson also provides actual floor plans of company houses throughout the country. 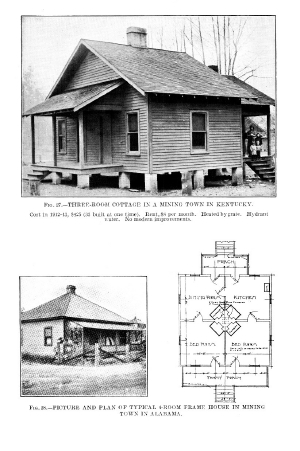 The floor plans reflect how families lived, how society viewed the homes, and what conveniences were considered essential.[1] Since these houses were provided by employers, they also reveal a great deal about how corporations viewed workers and their place in society. Company towns ranged from model developments that went beyond life’s basic necessities and included schools, libraries, and houses with modern conveniences to bare, dismal communities that provided shelter and little else.[2]

Company housing dots American landscape even today as historical neighborhoods or modern communities. For example, the Pullman neighborhood in Chicago, Illinois was developed for the employees of the Pullman Palace Car Company and Hershey, Pennsylvania was a planned community for the Hershey family and workers. Both of these are included in the BLS survey. Facebook’s Anton Menlo development in Menlo Park, California, is a recent example of company housing. Magnusson’s survey of company housing in two industries (mining and manufacturing) provides valuable insight into the creation of these important features in the American landscape. Elements in this report appeal to economists, economic historians, architects, cultural historians, and researchers interested in historic buildings and company towns.