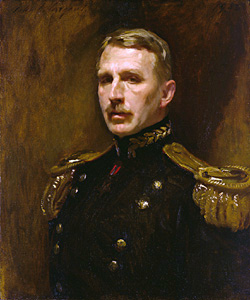 5th Chief of Staff of the United States Army

Leonard Wood was a United States Army major general, physician, and public official. He served as the Chief of Staff of the United States Army, Military Governor of Cuba, and Governor General of the Philippines. He began his military career as an army doctor on the frontier, where he received the Medal of Honor. During the Spanish–American War, he commanded the Rough Riders, with Theodore Roosevelt as his second-in-command. Wood was bypassed for a major command in World War I, but then became a prominent Republican Party leader and a leading candidate for the 1920 presidential nomination. (Source: Wikipedia)