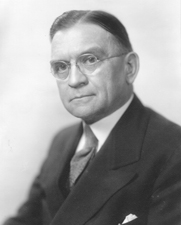 Frederick Van Nuys was a United States Senator from Indiana. Born in Falmouth, he attended the public schools and graduated from Earlham College in 1898 and from Indiana Law School in 1900. He was admitted to the bar in 1900 and commenced practice in Shelbyville moving shortly afterward to Anderson. From 1906 to 1910 he was prosecuting attorney of Madison County and was a member of the Indiana Senate from 1913 to 1916, serving as president pro tempore in 1915. He moved to Indianapolis in 1916 and continued the practice of law; he was United States attorney for the district of Indiana from 1920 to 1922. (Source: Wikipedia)