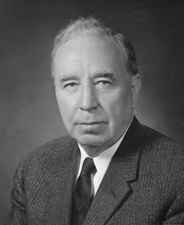 Andrew Frank Schoeppel was an American politician and a member of the Republican Party. He was the 29th Governor of Kansas from 1943 to 1947 and a U.S. Senator from 1949 until his death. He was born in 1894 in Claflin, Kansas and died in 1962 of abdominal cancer at the National Naval Medical Center at Bethesda, Maryland. (Source: Wikipedia)