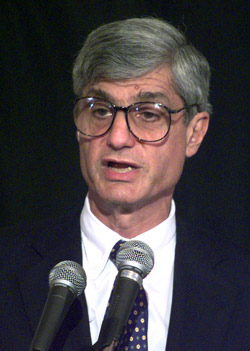 Former Secretary of the Treasury

Robert Edward Rubin is an American retired banking executive, lawyer, and former cabinet member. He served as the 70th United States Secretary of the Treasury during the Clinton administration. Before his government service, he spent 26 years at Goldman Sachs, eventually serving as a member of the board and co-chairman from 1990 to 1992. (Source: Wikipedia)