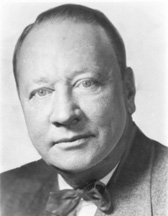 Robert Rice Reynolds was a Democratic US senator from North Carolina from 1932 and 1945. Almost from the outset of his Senate career, "Our Bob," as he was known among his local supporters, acquired distinction as a passionate isolationist and increasingly as an apologist for Nazi aggression in Europe. Even after America's entry into World War II, according to a contemporary study of subversive elements in America, he "publicly endorsed the propaganda efforts of Gerald L. K. Smith," whose scurrilous publication The Cross and the Flag "violently assailed the United States war effort and America's allies." One of the nation's most influential fascists, Smith likewise collaborated with Reynolds on The Defender, an antisemitic newspaper that was partly owned by Reynolds. (Source: Wikipedia)