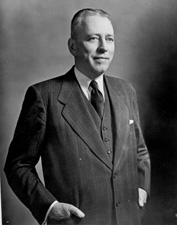 Irving McNeil Ives was an American politician. A member of the Republican Party, he served as a United States Senator from New York from 1947 to 1959. He was previously a member of the New York State Assembly for sixteen years, serving as Minority Leader (1935), Speaker (1936), and Majority Leader (1937–1946). A liberal Republican, he was known as a specialist in labor and civil rights legislation. (Source: Wikipedia)