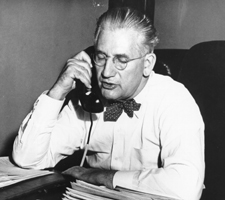 Paul Howard Douglas was an American politician and Georgist economist. A member of the Democratic Party, he served as a U.S. Senator from Illinois for eighteen years, from 1949 to 1967. During his Senate career, he was a prominent member of the liberal coalition. (Source: Wikipedia)