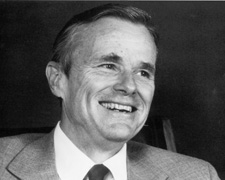 Nicholas Frederick Brady is an American politician from the state of New Jersey, who was the United States Secretary of the Treasury under Presidents Ronald Reagan and George H. W. Bush, and is also known for articulating the Brady Plan in March 1989. In 1982, he was appointed to succeed Harrison A. Williams as a United States Senator until a special election could be held. He served in the Senate for 8 months. (Source: Wikipedia)