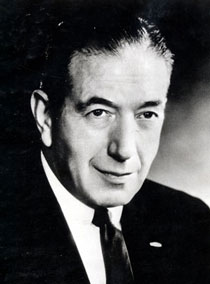 Karl Robin Bendetsen was born in Aberdeen, Washington. His parents, Albert M. and Anna Bendetson, were first-generation American citizens. Karl changed the spelling of his last name during early 1942, and would later make written claims to descent from Danish lumbermen who had come to America as early as 1670. (Source: Wikipedia)