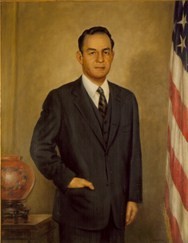 Joseph Walker Barr was an American businessman and politician from Indiana. He served one term in the United States House of Representatives and the United States Secretary of the Treasury from December 21, 1968 until January 20, 1969, in President Lyndon B. Johnson's cabinet. He was a member of the Democratic Party (Source: Wikipedia)