Commercial banks regularly file Reports of Condition and Income with their regulators. Nowadays, these reports of balance sheet and income statement information are filed quarterly; but originally, the Office of the Comptroller of the Currency (supervisor of national banks) would issue a “call” for the reports on specific, but irregular, dates, leading to the colloquial term Call Reports. The irregular timing interjected a bit of surprise so that banks wouldn’t “window dress” their reports to regulators. Before 1914, the OCC collected reports five times per year. From the 1910s through the early 1930s, the number of calls varied from three to five per year. The name Call Report stuck even though in modern times (since the 1930s) the reporting dates are always the end-of-quarter dates.

FRASER contains scans of Call Reports for the years 1916-1959, but with 400,000+ PDFs it can be difficult to tell what exactly is available and how to find specific items. This post will discuss some of the frequently asked questions about the Call Reports.

What’s available from other sources? 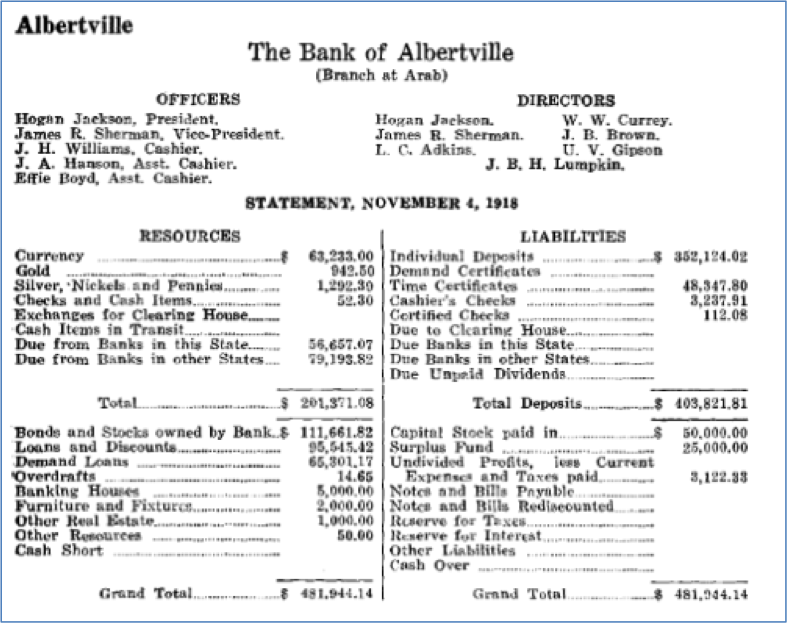 Excerpt from the Annual Report of the Superintendent of Banks of the State of Alabama, for Fiscal Year Ending September 30, 1918.

How are the reports described and organized on FRASER?

PDFs have been created for each report, for the images appearing at the beginning and end of each reel, and for any “heading” cards inserted between reports. The PDFs are presented in the same order as the content is on the microfilm.

The paper reports were arranged before they were microfilmed, although there may be some irregularities in arrangement. The microfilm reels are generally organized by date (although reel numbers are not assigned chronologically) and by state member bank vs. national bank. The reports are further organized as follows:

State Member Bank reels for 1916, 1921, 1927: By Federal Reserve District, then alphabetically by state and city

Reports for reserve cities and total or recap reports aggregated by bank, district, etc. appear after all the individual reports by city. Despite this general organization, some reports may occur out of order.

Metadata have been extracted for the type of bank (state member bank or national bank), Federal Reserve District, state, country, and city of the individual bank or branch. Additionally, the type of report, either for an individual bank or a group of banks, is indicated in the item’s metadata. The quality of the handwriting and overall clarity of the text in these reports vary considerably. In many cases, the name of the bank, city, and/or county are difficult to decipher. The sheer number of reports would make extracting all this information extremely time consuming and cost prohibitive. Therefore, only the first letter of the city of the report has been extracted. County names, bank names and charter numbers have not been extracted.

While we strive for accuracy in what we post on FRASER, the size of this project necessitated a different approach to quality assurance than the 100 percent quality control that we apply on most projects. A random sampling method was carried out on the remainder of the collection to ensure that the overall quality was at an acceptable level. Where errors could be flagged by automated methods, we reviewed those flagged items individually and made corrections as necessary. Still, there may be a small error rate resulting in some of the 400,000+ PDFs having been grouped improperly (two separate reports in one PDF, for example) or inaccurate metadata (the wrong city letter applied to an item’s title, for example).

Optical Character Recognition (OCR) has not been run on the images to create searchable text, as the OCR accuracy would be extremely poor and users would receive very incomplete results because of the prominence of handwriting, poor clarity of much of the typewritten information, and poor quality of some of the microfilm itself.

Example of a handwritten call report.

The following metadata is captured at the reel level:

The following metadata is captured at the individual item level: 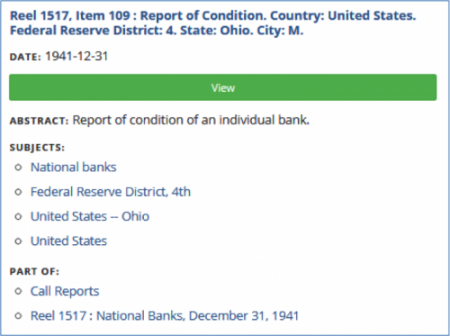 What’s the best way to find the report(s) I’m looking for?

Browse by Section: This section presents information in three columns. The first column is the reel. The reels were not created in chronological order, and the sequence of reel numbers was shared with other collections. As a result, reel numbers may imply more gaps in the collection than actually exist. It is recommended to filter the Reel column by typing in the year of interest at the top of the column. Once a reel is clicked, the second column will provide a list of the contents of that reel, also with a filter bar at the top of the column. Once an item is clicked, a third column will appear with more information about that item and buttons to View or Download the PDF. 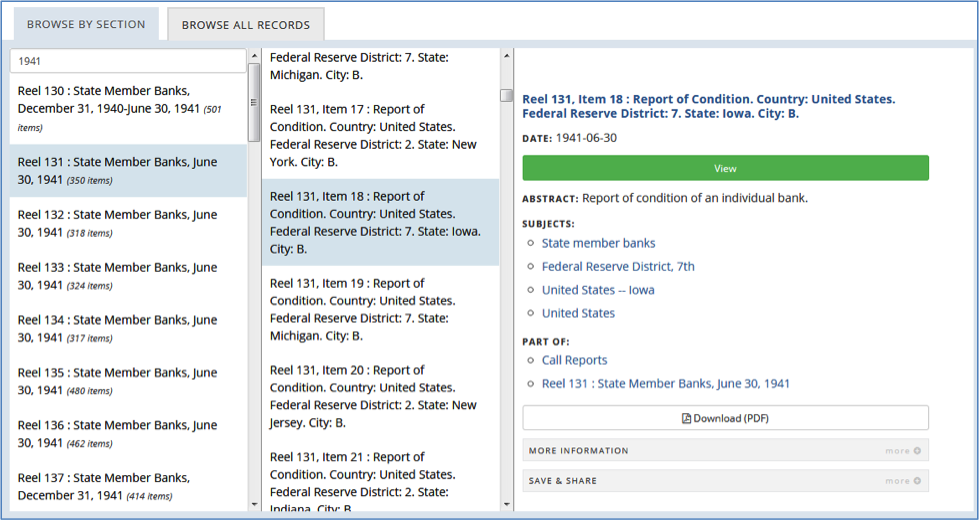 Browse All Records: Use a single list of 400,000+ records (reels and contents), sorted alphabetically, with a filter bar that can be used to filter information in the title of the record. Because of the size of the list, it may be slow to display and respond. 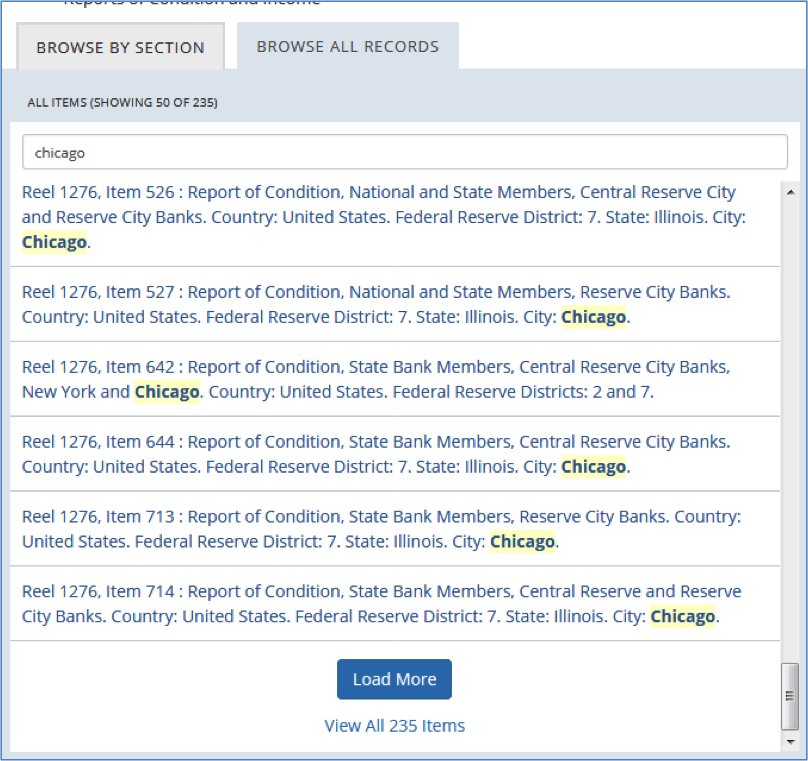 Search Within this Collection: As noted previously, the PDFs are not full-text searchable, but metadata can be searched.

Search results can then be further refined by subject and date and sorted by date or title. 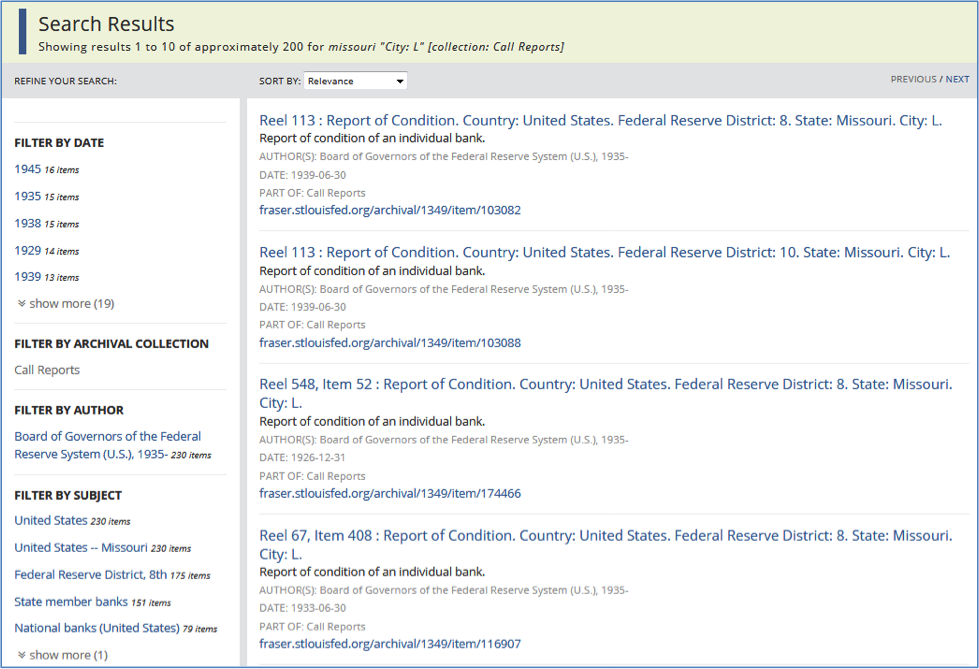 How can files be downloaded in bulk?

We do not currently provide functionality to download these files in bulk. If you need to download a large portion of the Call Reports, please feel free to contact us to discuss what we can do to assist you with obtaining the files.