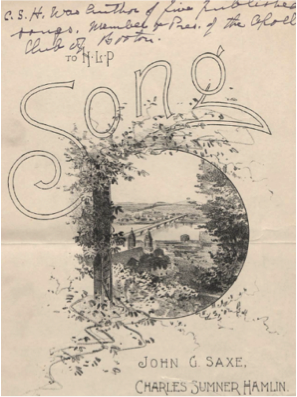 Charles S. Hamlin served as the first Chairman (then called “Governor”) of the Federal Reserve Board from its creation in 1914 until 1916 and as a member of the Board for another 20 years.[1] FRASER holds digitized copies of selected Hamlin papers held at the Library of Congress Manuscript Division and has created a hyperlinked finding aid to assist researchers. These archival records date from the late 19th century until his death in 1938; our digitized collection dates primarily from his time at the Fed.

The bulk of these records are typewritten transcriptions of Hamlin’s diaries and excerpts from his “scrapbooks” of Federal Reserve Board memos and correspondence, but they also include files from his earlier legal career in Boston, speeches (including a series of speeches in support of the unsuccessful 1904 Democratic presidential candidate Alton Parker), and—perhaps unique among Fed chairs—sheet music for a love song he copyrighted in 1899.

During his time on the Board, Hamlin oversaw the Capital Issues Committee, which “determined whether proposed security issues were compatible with the wartime national interest.”[2] Companies needed the Fed’s approval to issue corporate securities, which could compete against the Liberty Loan and therefore potentially damage the country’s war financing. This September 1918 diary entry, which recounts that the American Tobacco Company and “Mr. Stanley” of Guaranty Trust Company (later of Morgan Stanley) requested permission to issue “$25 million of notes,” shows the Fed’s delicate position in balancing government and business concerns.

Through Hamlin’s careful, regular journaling, the collection provides insight into contemporary thinking about the events of the day, including some “real-time” reflections on the 1929 stock market crash: An October 29, 1929 diary entry states, “The Stock Market went to pieces yesterday,” and a November 1, 1929, memo begins, “For the second time in its relatively short history the Federal Reserve System has piloted the financial community through a crisis of major importance and emerged with enhanced prestige.” Hamlin’s diaries and scrapbooks are a fascinating, sometimes deeply personal look at the early years of the Fed, both its business and its staff and leadership.