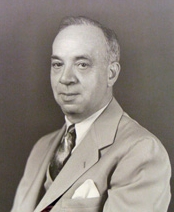 Philip B. Perlman was a Baltimore native, the son of Benjamin and Rose Nathan Perlman. Graduating from Baltimore City College secondary school in 1908, Perlman worked as a reporter for the Baltimore American while studying political economy at Johns Hopkins University. He studied law at the University of Maryland School of Law, being admitted to the bar one year prior to receiving a law degree in 1912. He began working for The Evening Sun in 1910, first as a court reporter, and then as City Editor from 1913–1917. It was probably at this time that he got to know H. L. Mencken. (Source: Wikipedia)