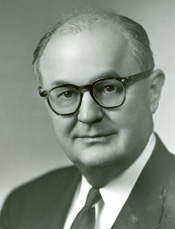 John William Wright Patman was a U.S. Congressman from Texas in Texas's 1st congressional district and chair of the United States House Committee on Banking and Currency (1963–75). Patman was a fiscal watchdog who acted to protect American wage earners by identifying and preventing the excesses and unfair practices of the banks and the Federal Reserve. He sponsored the Robinson-Patman Act of 1935, which was designed to protect small retail shops against competition from chain stores by fixing a minimum price for retail products. (Source: Wikipedia)