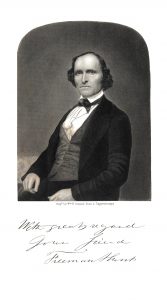 Portrait of Freeman Hunt, from The Merchants’ Magazine and Commercial Review, July 1849, Vol. XXI, No. I.

Recently The Merchants’ Magazine and Commercial Review, a precursor to the Commercial and Financial Chronicle,[1] was added to the FRASER collection. Freeman Hunt, the creator and original editor of the monthly magazine, published the first issue in July 1839. During the first half of the 19th century, business owners and entrepreneurs didn’t have easy access to current economic news. Hunt recognized the need and The Merchants’ Magazine was born. Its inception was revolutionary: The paper was printed before the Associated Press was formed (1846), before The New York Times hit the newsstand (1851), and decades before The Wall Street Journal began publication (1889).

On the first page of the debut issue, Hunt made his case for the new publication, arguing it was not only needed but “demanded” by the business community. He expressed his passion for commerce, stating that “Commerce is not only a business, but a science, extremely intricate in some of its developments, and calculated to elevate the mind, and enlarge the understanding.” He added that one of the magazine’s “prominent objects will be, to raise and elevate the commercial character—to point out the requisites necessary to form the thorough and accomplished merchant.”

Hunt set out to examine issues pertinent to the merchant of the day. He stated that “Currency, exchanges, banking, commercial and marine law, partnerships, agencies, and statistical information, commercial and manufacturing, will have our special attention, as well as the domestic trade of the United States.” The publication features a wide variety of content from numerous authors and sources.

The layout of each monthly issue follows the same general format: Roughly the front half includes the primary content—original essays and previously unpublished lectures (often originally presented before the Mercantile Library Association of New York). Roughly the back half, which includes statistical data, covers an array of topics such as insurance, manufacturing, bank statistics, commercial statistics, navigation, railroads, and occasionally a letter to the editor. For example, the December 1840 issue includes an article on the commerce of China, a list of mercantile law reports, a biography of John Hancock, drawings of diamonds belonging to the Shah of Persia, and a review of the previously anticipated work A Dictionary of Commerce and Commercial Navigation. Book and magazine reviews, which grew more sophisticated over time, were usually at the end of the issue. Notable reviews include those for Uncle Tom’s Cabin, or Life Among the Lowly[2]; The Scarlet Letter: A Romance; Memoirs of Margaret Fuller Ossoli; and Harper’s New Monthly Magazine. The magazine categorizes the issues into two volumes: Volume 1 (January-June) and Volume 2 (July-December). While not every topic noted above can be found in every issue, each one (and more) is usually covered at least once in a given volume. 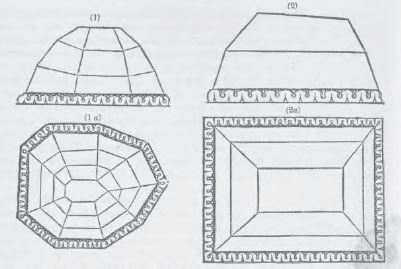 From The Merchants’ Magazine and Commercial Review, December 1840, Vol. III, No. VI.

From The Merchants’ Magazine and Commercial Review, May 1852, Vol. XXVI, No. V.

The magazine also features a wealth of early statistical information from a variety of sources, including newspapers, journals, industry shipping lists, bank commissioners’ reports, and documents from national and international government agencies. While some data illustrate or expand articles, most are relegated to a separate section. For the modern researcher, The Merchants’ Magazine and Commercial Review provides a revealing look at the evolving U.S. economy, rapidly advancing technology, and new ways the business world was finding to measure both. A reader studying the magazine’s statistical information on U.S. cotton, for instance, would find the crop’s growth unmistakable. Similarly, nautical and railroad statistics developed into major topics as the magazine evolved, and many innovative engineering feats were highlighted (e.g., the Atlantic telegraph, a ferry to Jersey City, and what would be later known as Eads Bridge).

Many notable 19th century writers contributed to The Merchants’ Magazine. A regular correspondent, editor, and long-time associate of the magazine was Thomas Prentice Kettell.[3] Kettell was a respected author of “financial literature” and a “well-known authority on the cotton trade.”[4] Additional early contributors include politician and editor Horace Greely[5]; U.S. federal judge Joseph Hopkinson; author Richard Hildreth; and politician, historian, and author George Tucker. (The year before the magazine published Tucker’s first article, it reviewed his notable book The Theory of Money and Banks Investigated.)

For 20 years, Hunt delivered on his initial promise to his readers. He remained the sole proprietor and editor of The Merchants’ Magazine and Commercial Review until his death in March 1858. From 1858 until 1860, Thomas Prentice Kettell was the primary editor. On February 1, 1861, William Buck Dana purchased the magazine for $7,000.[6] Although Kettell continued to write regularly for the magazine, he relinquished editing duties. Dana, a lawyer turned journalist and editor, took on this new endeavor around the time of the Civil War. 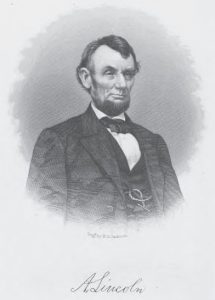 Portrait of Abraham Lincoln, from The Merchants’ Magazine and Commercial Review, May 1865, Vol. LII, No. V.

The potential for civil war is evident in one of the first issues under Dana’s ownership. Published two months before the Civil War began, the February 1861 issue of The Merchants’ Magazine expresses the uncertainty and anxiety of the economic climate. The June 1861 issue provides confirmation of the Civil War with the publication of a copy of Abraham Lincoln’s presidential proclamation that established a blockade of the southern ports. The magazine mentions the war many more times, notably publishing a biography of Abraham Lincoln in May 1865 by a writer who was at the White House the day before the president was assassinated.

Dana found it challenging to run The Merchants’ Magazine in an economic era affected by war. An overall reduction in the nation’s trade industries and rapid changes in the field of statistical data prompted changes to the publication—and cost cutting measures. The magazine slowly reduced its size from 144 pages to 80 pages. Statistical coverage was condensed, while coverage of the war demanded more attention as “tariff enactments, the creation of a national banking system, and various monetary and tax proposals won ongoing discussion.”[7] Dana recognized the need to publish more timely information; in July 1865, once the Civil War had ended, he published the first issue of the weekly magazine the Commercial and Financial Chronicle.

After 10 years under Dana’s leadership, The Merchants’ Magazine published its final issue. The December 1870 publication announced that starting January 1871, subscribers of the magazine would begin receiving copies of the already established weekly Commercial and Financial Chronicle.[8] In the announcement, the magazine explained the reasons for this change: The advancements of railways and telegraphs were increasing the pace at which news was being circulated. The magazine noted that “in the place of ventures which formerly required months to consummate, now a few days or hours or even moments include both their inception and completion.” This meant that the monthly publication was unable to keep pace with “the growing wants and necessities of the community.” At this time, Dana also proposed a new publication titled the Commercial and Financial Year Book of Hunt’s Merchants’ Magazine.[9] It would be published once a year and contain yearly statistics, reports, and brief biographies of prominent merchants who had died the previous year. Dana was confident that between the weekly publication and the year book, “the interests which the [Merchants’ Magazine] was intended to subserve will be fully provided for.”

In the July 1849 issue of The Merchants’ Magazine and Commercial Review, 10 years after the first issue was published, Hunt reflected on his vision for the publication. He stated that if he had managed “to promote the study of it [commerce] as a Science, and to establish something worthy of the name of the LITERATURE OF COMMERCE, he will deem it a matter for rejoicing.” A groundbreaking publication at its inception, the magazine ultimately provided a foundation for modern business publications. Now it provides a unique and valuable look into the commercial history of the United States during the second half of the 19th century.

[3] For a biography of Kettell, see this article in The Merchants’ Magazine: “Commercial Sketches with Pen and Pencil. Thomas Prentice Kettell.”

[5] This Greely submission was published in The Merchants’ Magazine in 1939, two years before Greely founded his own newspaper, the New-York Tribune.

[8] The Commercial and Financial Chronicle also announced this publication change in the January 7, 1871 issue.

[9] Later referred to simply as the Financial Review.