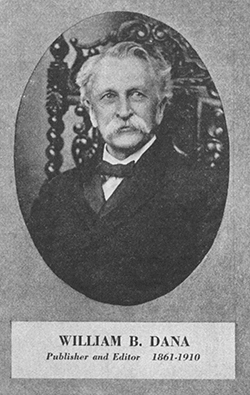 FRASER’s collection of the Commercial and Financial Chronicle is expanding, so it may be helpful to know a bit about the publication’s history.[1] The Chronicle was a financial newspaper published from 1865 to 1987. Despite a variety of changes and editors, the Chronicle maintained a consistency and accuracy its readers could rely on. William Buck Dana, the creator of the publication and principle editor from 1865 until 1910, established the standards.

Dana’s publishing career began on February 1, 1861, with the purchase of Hunt’s Merchants’ Magazine.[2] From 1839 until it was absorbed into the Chronicle in 1871, the magazine was a principal source for all things commerce related in the United States (click here to see a letter from the editor regarding the merger). The magazine had “provided reports on agriculture, manufacturing, commodities, and merchandise trade; banking; insurance; currency; navigation; and legislation and court decisions affecting the conduct of business.”[3]

On July 1, 1865, about four years after purchasing Hunt’s Merchant’s Magazine, Dana published the first issue of the Chronicle. Dana was precise in his approach to informing his readers. Evidence of this is found in the complete title used for the first five years of the publication: The Commercial & Financial Chronicle, Bankers’ Gazette, Commercial Times, Railway Monitor, and Insurance Journal. A Weekly Newspaper, Representing the Industrial and Commercial Interests of the United States.

Under Dana’s leadership, the Chronicle expanded and improved. He published numerous supplements—at no additional cost to readers—that addressed specific topics such as the railway industry and state and city bonds. (See the chart for supplement names and dates.) Each time a supplement was added or significantly changed, Dana alerted Chronicle readers, as in this example from Volume 60.

In 1909, Dana celebrated 50 years in publishing. He died the next year at the age of 81. Jacob Seibert Jr., a long-term Chronicle employee, became the next publisher.[4] Seibert and his successors followed Dana’s example, continuing to enhance and expand the Chronicle’s business news and statistical information.

On November 4, 1939, the Chronicle celebrated 100 years of publishing. The anniversary issue (Volume 149) pays homage to the Chronicle’s pioneers and is an excellent resource for diving deeper into the early history of this longstanding American publication. The Chronicle remained an active publication until 1987.

[1] This FRASER Staff Picks article provides additional details about the content of the publication.