Although FRASER has a significant collection of banking legislation, it can sometimes be difficult for those who aren’t lawyers or librarians to find a particular law—whether it’s the Federal Reserve Act, the Bank Holding Company Act, or Dodd-Frank.

What we post on FRASER are usually “slip laws”: These are stand-alone publications of individual pieces of legislation that represent the act (or resolution) of Congress as it was on the day it was signed into law.

Until the early 20th century, individual laws were referred to by their full titles:

Slowly the conventions began to change and laws began to be numbered by Congressional session:

Beginning around 1910, laws began to include not only chapter and title information, but which Congress passed the law:

Official short titles also began to be included in the text of some laws. As legislation grew more complex throughout the 20th century, individual titles[1] of certain laws began to be given their own short names. For instance, the Equal Credit Opportunity Act (1974) is actually Title V of Public Law 93-495, “An Act To Increase Deposit Insurance From $20,000 To $40,000, To Provide Full Insurance For Public Unit Deposits Of $100,000 Per Account, To Establish A National Commission On Electronic Fund Transfers, And For Other Purposes.”

FRASER uses the short or popular name[2] for any piece of legislation that has one and uses the long title for any law that has no common name. The long title, the public law designation, and any other commonly used names are listed as alternative titles. Each law’s metadata on FRASER also includes page information for the United States Statutes at Large (for example, 38 Stat. 251. for the Federal Reserve Act) to help you create a full and correct citation.

Because most long titles begin with the words “An Act to,” they sort at the top of the list, which defaults to alphabetical order. This list can also be filtered by keywords (as in the box that says “federal” below). To re-sort by date, choose “Date” from the “Sort By” drop-down. 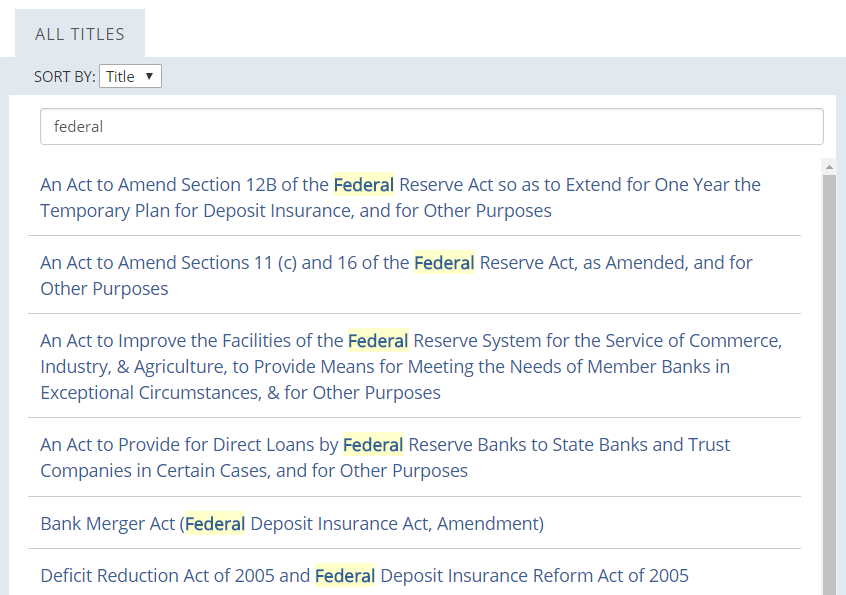 We have only copies of some laws, as part of a larger omnibus of legislation, such as Antitrust Laws with Amendments, 1890-1956. Depending on the organization of the book, it may be posted to FRASER in pieces or may list the material using the table of contents. Either way, these laws are described exactly as stand-alone laws are. Using FRASER’s search feature to look for the common or full name should find the correct item. You can also use the collection search feature to search by keyword only within the banking legislation theme.

This collection is always being expanded as we find new sources to digitize. For help locating an individual law on FRASER, we encourage you to contact us at fraser@stlouisfed.org.

(This article is heavily indebted to “Basic Overview on How Federal Laws are Published, Organized and Cited” by Assistant Federal Reserve Board Counsel Rick McKinney, http://www.llsdc.org/assets/sourcebook/federal-laws.pdf [PDF].)

[1] The legal term for sections or subdivisions.

[2] We use the Cornell University “Table of Popular Names” website to determine which unofficial popular names are used for FRASER legislation entries https://www.law.cornell.edu/topn/0