As a federal agency, the Board of Governors of the Federal Reserve System transfers its permanent records to the National Archives and Records Administration (NARA) after a specific amount of time defined by a records schedule. NARA organizes the records received based on the agency that created or maintained them into “record groups.”[1] The records for the Board of Governors are found in Record Group 82, the Records of the Federal Reserve System.[2]

The bulk of the collection is in the Central Subject File, consisting of 2,630 boxes and 1,152.06 linear feet. In the digitization planning process, FRASER librarians had to reference two documents: a decimal list[3] and a box list[4] to find the necessary information.

The decimal list is the hierarchical classification system used by the records staff at the Board of Governors to organize records. The box list provides the start and end decimal for each box. Together, these two documents allow a person to identify boxes of interest, but the process can be tedious.

FRASER staff converted[5] and merged the two lists into an Excel spreadsheet, with the file classification, title, and date; box number; and order within the collection all in a single table. This new spreadsheet made navigating the collection and finding the necessary information much easier. From there, we realized we could turn the list into something to be shared with the public. After converting the spreadsheet into an Access database, we acquired series level information, such as title, extent, access information, a general description of the record and media types included and added this to a second table in the database.[6] We also added links to items available digitally, either on FRASER or in NARA’s collection at archives.gov. Finally, database reports were created to format the information for public distribution. The reports were compiled into a PDF and made available as a finding aid in the collection on FRASER. 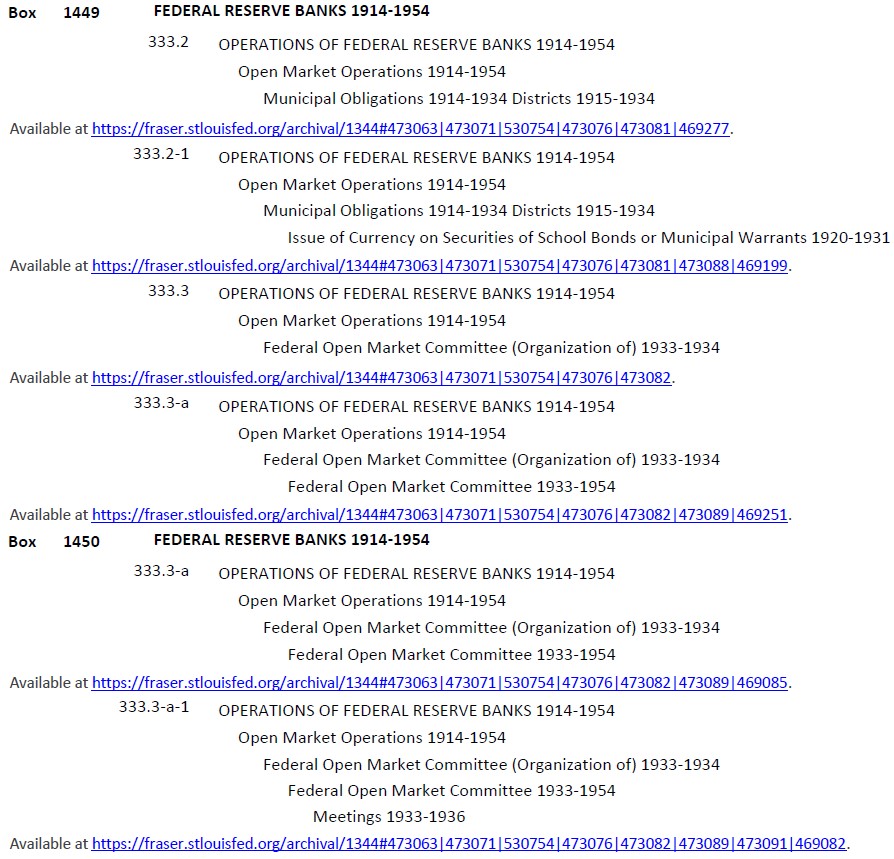 Additional digitization is in progress. The finding aid will be updated with links as new content is made available on FRASER.

Richardson, Gary. “The Records of the Federal Reserve Board of Governors in the National Archives of the United States.” Financial History Review, April 2006, 13(1), pp. 123-13; http://works.bepress.com/gary_richardson/11.

[1] For more information on the concept of record groups, see NARA’s website, https://www.archives.gov/research/guide-fed-records/index-numeric/concept.html