Staff Picks: The Statements and Speeches of Andrew F. Brimmer

With his appointment by President Lyndon B. Johnson in 1966, Andrew F. Brimmer became the first African-American member of the Federal Reserve Board of Governors. With experience as an economist for the Federal Reserve Bank of New York, a college professor, and assistant secretary of economic affairs for the U.S. Department of Commerce, Brimmer brought a wealth of knowledge and new perspective to the Board of Governors. Over his eight years as a Board member, Brimmer not only solidified his reputation as “an expert of international monetary policy” but he also used his status to bring to light the struggles of black Americans.[1] Of particular interest are his speeches on the economic disadvantages blacks faced.

Because Brimmer served on the Board before and during the mid-century Civil Rights Movement, these speeches provide a glimpse of the positive changes the Movement brought and the struggles still faced after it formally ended. His statements and speeches include data comparing the employment, income, and job placement of African Americans and whites. He also presents thought-provoking perspectives and ideas, such as how desegregation could adversely affect blacks in professional occupations. Dig into this and other interesting topics within the Statements and Speeches of Andrew F. Brimmer. 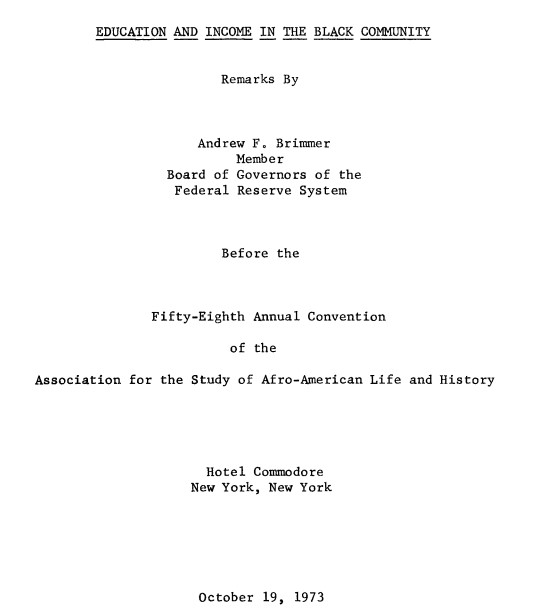 Education and Income in the Black Community: Remarks before the Fifty-Eighth Annual Convention of the Association for the Study of Afro-American Life and History, Hotel Commodore, New York, New York, October 19, 1973, https://fraser.stlouisfed.org/scribd/?item_id=10420&filepath=/files/docs/historical/federal%20reserve%20history/bog_members_statements/brimmer_19731019.pdf