Each year, a collection of documents known as “the Budget” is released with details on the federal government’s estimated spending for the upcoming fiscal year. This practice dates back to the signing of the General Accounting Act of 1921 (Public Law 67-13, also known as the Budget and Accountancy Act of 1921), which created the Bureau of the Budget as well as the General Accounting Office.[1] Each year since then, the president and the Bureau of the Budget (now known as the Office of Management and Budget (OMB)) have submitted a budget proposal to Congress for the upcoming fiscal year. FRASER’s budget proposals and supplemental documents date back to the budget for the fiscal year ending June 30, 1923,[2] prepared in 1922.

The Budget documents have varied over time. The main title, Budget of the United States Government, dates back to the origins of the Bureau of the Budget. It is a fairly hefty volume[3] that begins with the president’s budget message, followed by detailed information about the proposed spending and budget details for each agency. The Appendix, published since fiscal year 1952, provides even more detail. The Historical Tables have been published since fiscal year 1986 and are available for several decades.[4] 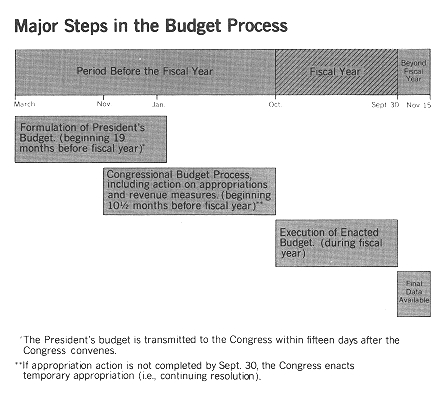 Analytical Perspectives is a current title that is also more accessible for the layman. It “contains analyses that are designed to highlight speciﬁed subject areas or provide other signiﬁcant presentations of budget data that place the budget in perspective.”[5]

[2] Currently, “The Federal fiscal year begins on October 1 and ends on the subsequent September 30. It is designated by the year in which it ends; for example, fiscal year 2015 began on October 1, 2014, and ended on September 30, 2015. Prior to fiscal year 1977 the Federal fiscal years began on July 1 and ended on June 30. In calendar year 1976 the July-September period was a separate accounting period (known as the transition quarter or TQ) to bridge the period required to shift to the new fiscal year.” United States. Office of Management and Budget. Historical Tables, Budget of the United States Government (Fiscal Year 2017), page 3. https://fraser.stlouisfed.org/scribd/?toc_id=516931&filepath=/docs/publications/usbhist/BUDGET-2017-TAB.pdf&start_page=5.