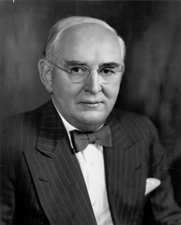 Arthur Hendrick Vandenberg was an American politician who served as a United States Senator from Michigan from 1928 to 1951. A member of the Republican Party, he participated in the creation of the United Nations. He is best known for leading the Republican Party from a foreign policy of isolationism to one of internationalism, and supporting the Cold War, the Truman Doctrine, the Marshall Plan, and NATO. He served as President pro tempore of the United States Senate from 1947 to 1949. (Source: Wikipedia)