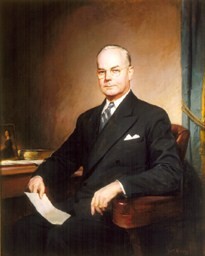 John Wesley Snyder was an American businessman and senior federal government official. Thanks to a close personal friendship with President Harry S. Truman, he became Secretary of the Treasury in the Truman administration. He is the first native-born Arkansan to hold a U.S. Cabinet post. (Source: Wikipedia)