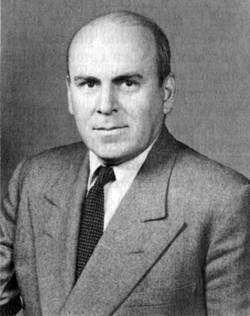 John Jay McCloy was an American lawyer, diplomat, banker, and a presidential advisor. He served as Assistant Secretary of War during World War II under Henry Stimson, helping deal with issues such as German sabotage, political tensions in the North Africa Campaign, and opposing the atomic bombings of Hiroshima and Nagasaki. After the war, he served as the president of the World Bank, U.S. High Commissioner for Germany, chairman of Chase Manhattan Bank, chairman of the Council on Foreign Relations, a member of the Warren Commission, and a prominent United States adviser to all presidents from Franklin D. Roosevelt to Ronald Reagan. (Source: Wikipedia)